Subsurface coal mining underlies many regions of southwestern Pennsylvania.  The remnant subsurface features from mining like mining rooms and pillars can and often do impact the integrity of proximal surface structures like buildings and roads.  Mine subsidence, which is lateral or vertical ground movement caused by mine voids, can cause building foundations to crack and shift, road beds to shift and in the worse cases, sink holes formation.  To mitigate these hazards, engineers turn to geophysical techniques to noninvasively image the subsurface for the presence of mine features.

In Fairchance, Pennsylvania, a new building construction project was being proposed on a 2-acre site with documented undermining.  THG was contracted to perform a geophysical investigation of the property to determine the extent and location of undermining.  Considering the contrasting electrical properties of mine features like stumps, saturated or clay filled voids, air filled voids, and the surrounding soils, 2-D electrical resistivity tomography (Electrical Imaging or EI) was chosen as the best method for this investigation.

EI profiles may not image an air-filled void (i.e., mining room); but, unsaturated mine workings exhibit a more resistive signature than the left-in-place coal (stumps) and even the surrounding conductive rock layers. EI profiles acquired in saturated environments will portray the increased permeability and saturation as decreased apparent resistivities above a saturated room.  However, when the depth to groundwater is unknown and no distinct features of mining are exhibited in the data, it can be difficult to differentiate open mine voids from stumps.  In this case, resistive anomalies appeared to be indicative of mine voids (due to size and geometry), but could just as easily be indicative of remaining coal stumps.  Several resistive features were mapped across this site and interpreted as mine voids.

Although additional geophysical or invasive testing is needed to determine if this interpretation is correct, the information gathered was still very useful in characterizing the site and determining that undermining exists directly beneath the site.  If additional testing were to prove our interpretation to be opposite of ground truth, our data could easily be reconsidered to match the new information.  Since the time of this survey, THG has implemented new operating procedures which include the collection of shear wave velocity data in conjunction with EI data in order to help constrain the EI data. 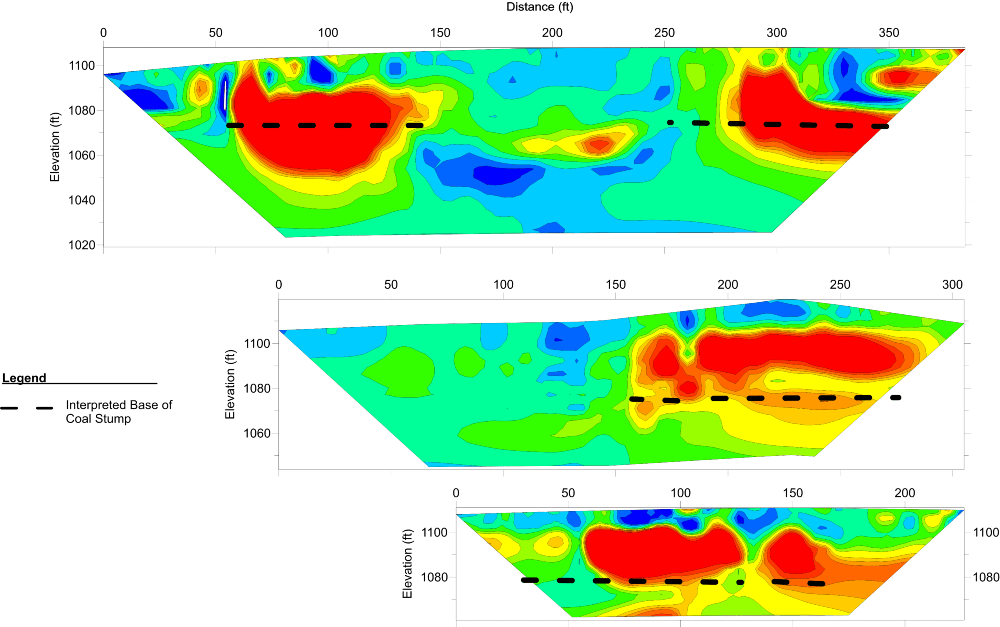