During a new landfill construction, an existing valley needed to be cut and filled to establish the design grade.  Additionally, natural drainage patterns needed to be piped into a designed drainage system.  After installation of the landfill base layers (subgrade materials, geotextile and fabric liner, bentonite) a large rain event occurred.  Within 24 hours, a large bulge of water was identified a the base of a side slope.  Contractors cut the liner to release the water and then repaired the liner.  Shortly after the repair another rain event occurred and the bulge refilled.

THG Geophysics was contracted to help identify the source of the water.  Our objective was to map the subsurface for indications of water flow and preferential pathways.  Due to the liners remaining in place during the geophysical survey, the preferred geophysical methods for identifying seeps and preferential pathways (2D electrical resistivity tomographic imaging) could not be deployed.  To overcome this condition and to maximize lateral coverage and resolution, THG deployed a frequency domain electromagnetic survey (FDEM) using GF Instruments multi-dipole tools: CMD-Explorer and CMD-MiniExplorer.   With real time GPS positioning support, the extent of the constructed landfill footprint was assessed.

The electromagnetic data was not successful at directly mapping any features that clearly indicated the source of the water bulge.  Variation was mapped throughout the subsurface but no indications of an unmapped seep were exhibited, nor were any indications of excessive water along the cut-fill line.  Some increased conductivity was observed just above the bulge location but is not exhibited as a “stream” feature but rather as an “area” feature.  By deduction, the electromagnetic data confirmed that the natural drainage had not all been engineered into the corrugated piping and likely was being re-charged by a seep.

The results of this survey were not definitive, but still provided the contractor with information they did not have previously.  It helped deduce the water source by eliminating the other possible theories.  Without ground-truth data, the results of geophysical surveys are often ambiguous.  It is important for the geophysicist to interpret the data as best possible, but also help deduce interpretations from what is not mapped in the data. 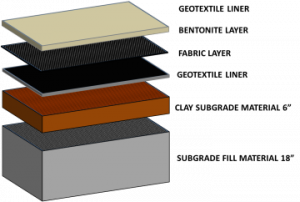 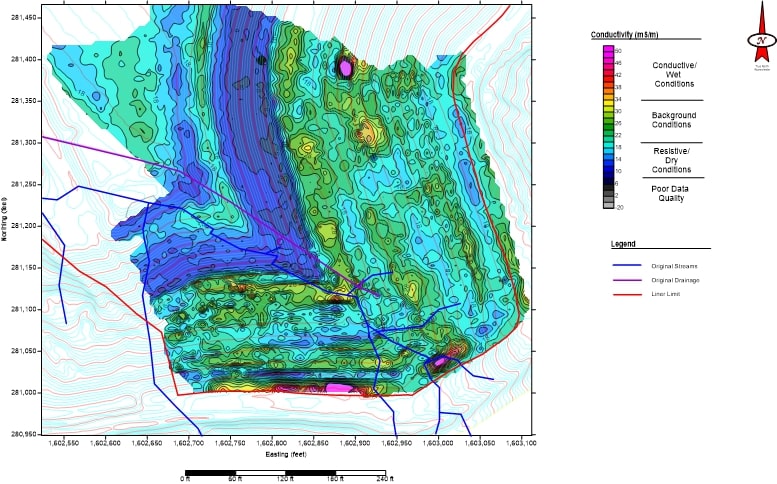