As part of a Marcellus gas well pad construction project in Ohio, our client was required to conduct deep dynamic compaction (DDC) to improve the characteristics of the soil in the shallow subsurface.  To assess the effectiveness of the technique, THG was requested to complete near-surface geophysical testing before and after dynamic compaction.

THG utilized Multi-Channel Analysis of Surface Waves (MASW) to evaluate the changes in shear wave velocity before and after compaction.  Two series of five tests were conducted using a Geometrics Geode 24-channel seismograph and 4.5-Hz geophones in a 5-foot step-out array.  The same locations were used for both series of tests. Each seismic event was initiated by a 16-pound sledgehammer striking a 10-inch by 10-inch aluminum plate. 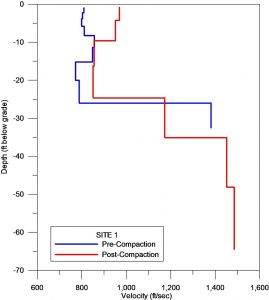